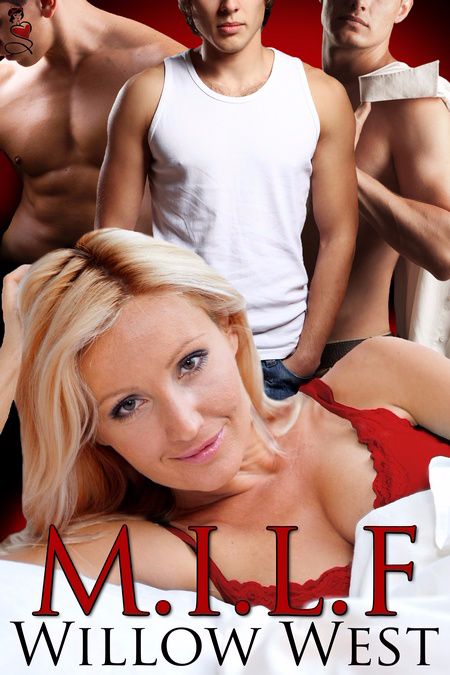 How far would you go to pay the bills?

Clara is a widow, living alone with a sporadic job and a pile of bills. When a young male friend of her daughter’s tells her he’s always fancied her, one thing leads to another and she ends up fulfilling his youthful fantasy.

When his father finds out, far from being upset, he suggests that Clara should be capitalizing on the assets she has. Before long, she is entertaining a series of unusual men and releasing their hidden desires.

Clara gasped as Dean’s mouth dominated hers. Her head screamed, ‘No!’ while her body betrayed her and responded to his probing tongue.

Clara kissed back with a frenzied passion. Her hands clawed at Dean’s shirt, slipping from the man-made material as she tried to score his flesh. Impatiently, she pulled his shirt over his head and moaned with pleasure at the feel of his warm, hard-muscled torso. As if spurred on by her passion, Dean lowered his kisses to Clara’s neck, forcing her head back to increase her arousal. His wet kisses quickly turned to playful nips as he relentlessly teased around her ears and into her golden curls, breathing in her scent.

Dean’s hand cautiously cupped Clara’s breast, rubbing his finger across the hardening peak that pushed through the fabric. Her nipples yearned for his touch to reach the skin, and she guided his hand under her thin blouse. Against her leg, Clara felt Dean’s hardened cock throbbing within his trousers. Clara reached down to touch the shape of his erection, cupping her hand to engulf the entire area. Dean’s face look pained.

His forlorn face tugged at Clara’s kind heart. She removed her hand, took his hand and led him to the soft couch. She pushed him down into the seat and seductively removed her blouse, button by button. In one quick motion, her bra vanished, ending its journey on top of her discarded blouse. Dean watched as her shapely breasts bounced free before his eyes. His gaze was mesmerised as she leant forward and, gently, lowered them towards his open mouth. Like a greedy child, Dean sucked and bit on the hardened nipples, slurping and moaning with sounds of fierce arousal. Clara moistened with the pleasure of his delight. She lowered her weight onto his muscled thigh and ground her hips to stimulate her own arousal. Clara was soon desperate to mate with this handsome buck. She reached her hand down to cup his aching manhood that strained at the confines of his jeans. Her frenzied hand made short work of the zip, and his throbbing length was released.

Clara lowered her mouth towards his erection, glancing up at his startled gaze with a slow smile of satisfaction. Her eyes gleamed and looked up through her lashes at his face, etched with arousal, as she slid her lips over his length, taking in as much as she could deep into her throat. Dean groaned with distracted pleasure and threw his head back onto the pillow. Clara knew that it was a moment young boys dreamed of, and she was eager not to disappoint her young beau.

View all books
Beneath the Depths