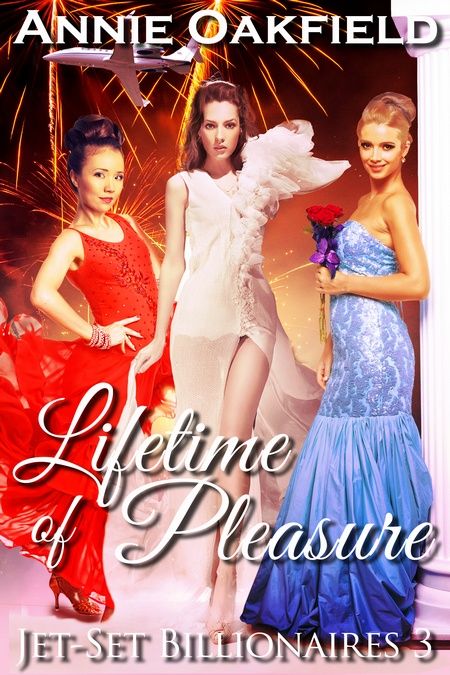 When eighteen-year-old native girl Dian agrees to accompany billionaire Joseph van der Waals as he travels the world in his private jet, it seems like the chance of a lifetime to impoverished Dian — until she learns that Joseph prefers his employees to share his appetite for sexual experimentation.

As her second day in Bangkok begins, following a night of bliss with three transgender waria and a group party in Joseph’s private hot tub, Dian is barely prepared for the new heights of sexual experience lurking in Bangkok’s legendary Chinatown.

From happy endings to ladyboy cabaret, Dian’s eyes are opened to a whole new world of possibilities.

READER ADVISORY: The mile-high club has never been this crowded before. Five men and women promised body and soul to a billionaire. It could get messy.

Jenna lay face-down on the bed, facing the door, and with her dress still on, but pushed up to expose her bottom. She clutched the edge of the bed tightly as if she was in danger of falling off. Sam lay along her back, still wearing his shirt, but his black pants lay on the floor alongside his shoes.

He thrust into Jenna eagerly, pressing hard against her bottom, making her cry out each time he moved. He must have known we were standing there, but he kept his half-closed eyes on Jenna, concentrating on the sex instead of the onlookers.

“So much for spying on them in secret,” Carmen whispered to me. As she spoke, Jenna’s eyes opened a little, and she managed a tight smile.

“I think they know we’re here,” I concluded.

“I think so too.” Carmen urged me inside, and we edged over to the corner of the room, so we could watch without being too intrusive. Sam didn’t stop thrusting, grunting each time his body pushed against Jenna’s.

“They were in a real hurry,” Carmen observed.

“Still got . . . panties on . . .” Jenna groaned. When I looked at her bottom, her underwear was pulled to one side. I had never dreamed such a thing was possible. Sam hadn’t bothered to take his underwear off, either. His bottom was still covered by his white briefs. This was something completely different from the gentle loving I’d envisaged for my first time.

But the urgency of their loving gripped me with excitement, and I couldn’t take my eyes from Jenna’s ecstatic face. Her knuckles whitened from her fierce grip; her body shook and rocked as Sam pleasured her. Her happy cries were pleading, not for mercy, but for more and more of the same.

Was sex really so intense that it would drive a woman crazy? She’d cried real tears when Joseph had spanked her. Carmen said she liked having her hair pulled . . . and now, Sam leaned forward, and one of his arms slid around her neck to press against her throat.

“She really likes this?”

“You should see her when we tie her up and torture her with candle wax.”

“Fuck me!” Jenna wheezed. “Fuck me hard. Make me come with you.”

“Uh-uh-uh-uhhh . . .” His bottom became a blur; Jenna’s body shook with the hammering he gave her.

“Yes, yes, yes!” Jenna squealed and buried her face in the bed covers. Sam shuddered and pressed himself hard against her body. His head dropped down beside hers, and he released a long and very deep groan.

“Wow,” I whispered. As I stared, Carmen moved beside me; colors flashed, and I didn’t realize what she was doing — until she padded across to the bed, clad in only her stockings and panties.

“Get off her, you selfish bastard,” she demanded. “Time to share it around, don’t you think?”

Party of a Lifetime

View all books
Teach Me