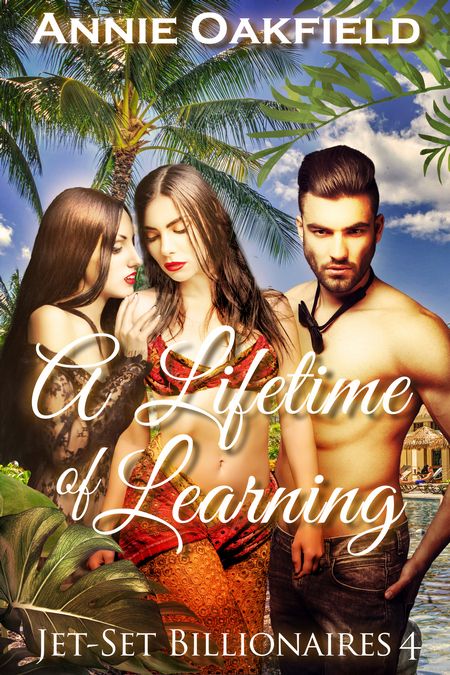 A Lifetime of Learning

The mile-high club moves on to the Japanese islands.

When eighteen-year-old native girl Dian agrees to accompany billionaire Joseph van der Waals as he travels the world in his private jet, it seems like the chance of a lifetime to impoverished Dian — until she learns that Joseph prefers his employees to share his appetite for sexual experimentation.

As her time in Bangkok comes to an end, Joseph’s promise to provide his pilot with an assistant brings new and unforeseen possibilities into Dian’s life, as does their secluded and private island destination off the coast of Japan.

READER ADVISORY: The mile-high club has never been this crowded before. Five men and women promised body and soul to a billionaire. It could get messy.

“Are you fretting again?” Pat asked. She eased my fingers from between my teeth and laid my wrist on the armrest.

“Pat, did you worry about your first time?”

“Not beforehand, because I had no idea it was going to happen. But once he started kissing me and touching me through my clothes, I knew I had a decision to make.”

“Whether to stop him or not?”

“Exactly. I could have asked him what he thought he was doing, or I could let him seduce me and take my virginity. To be honest, I was so thrilled by the idea that it was about to happen, I didn’t think much about stopping him.” She smiled. “I’m glad I didn’t. We had a few minutes of fun, and I felt like an adult after that.”

“But you told me sex doesn’t determine whether you’re a woman or not.”

“If you have sex tonight, or this week, or even this month, you’ll still be an adult, because you’re ready for it.” She tapped her forehead. “Up here.”

“Well, if Carmen thinks she’s good enough as a co-pilot, she might join our little family.”

“Come here, you adorable little thing.” She pulled me into a hug, and we rocked gently back and forward.  “Stop worrying about everything, please?”

“I’ll try,” I mumbled into her chest.

“Good girl.” She kissed the top of my head.

“Should I pull some privacy curtains across?” Sam asked from nearby, “Or can anyone join in?”

“We should find a way to distract her.” He dropped his voice to a whisper. “About her first time.”

“I think you were asleep.”

“And what did you tell her? Did you make it even worse?”

“He was nice to me,” I replied from Pat’s bosom.

“And you never offered to be her first instead?”

“Get out of my sight!” Pat growled at him, and he fled, but a small smile twitched her lips as she looked at me.

“Ladies and gentlemen,” Kanda’s smooth voice called over the speakers. “We’re beginning our descent into Miyako airport. Please return to your seats and fasten your seatbelts. The no-smoking part goes without saying. It’s a filthy habit, Give it up.”

“You can’t say that!” Carmen hissed. “Turn the mike—” a loud click signaled the end of their discussion.

Pat sighed. “We’ll have to get you laid later, my girl.”

“Maybe I should have myself waxed.”

Party of a Lifetime

View all books
Out in the Open