In Sangre, Florida, vampires and humans live in a peaceful co-existence until a string of murders starts to threaten their tranquil way of life.

While attempting to clear Niko’s cousin, Mario of involvement in the murders, the barbers and hairstylists band together to do what it takes to save Sangre and possibly themselves.

The Sangre Brotherhood – Book One

Shadowed eyes danced, dark and flickering. “He’s too good for you. You know it. I know it.”

“You know nothing about me.”

“I know you work at the barbershop that’s full of the likes of you. No decent human or vampire would ever step foot in that place.”

“I’m a barber. If my clients are paying with cold hard cash, I don’t ask questions about their personal lives.”

“You do business your way, and I will do it my way.”

“Why did you come to Sangre? Who, or what, are you running from?”

“I didn’t come here to be interrogated by some ponce hairdresser.” Niko turned to leave, but a firm grip on his bicep stopped him. He jerked his arm hard but didn’t loosen Jerrod’s viselike grip.

Jerrod pulled Niko in so close that Niko could feel his heated breath race across his face. “I’m warning you,” he said through gritted teeth. “And I only give one before you feel the wrath I can bring down on you.” 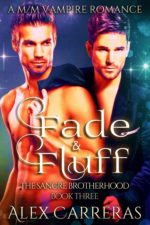 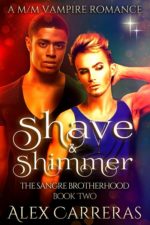 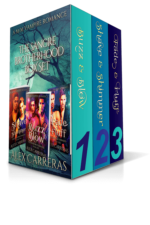