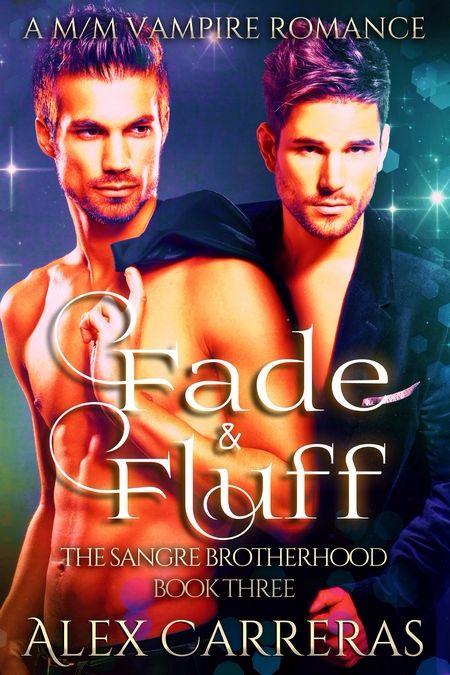 Jerrod Zaman, vampire and hairdresser extraordinaire, settled in Sangre, Florida to forget about his past, but Kairon who owns the barbershop across from Jerrod’s salon refuses to let him.

Kairon Brody still loves his ex and would love to rekindle their on-again-off-again relationship, which is a problem since his ex does not feel the same way. Kairon wants to convince Jerrod that they should get back together before possibly losing his eternal life at the hands of Alderman, a vindictive vampire who, with Jerrod’s help, Kairon thought he’d killed months earlier.

Sounds complicated? It is. But between breaking and entering, dodging vampires with murder on the mind, and a family member doubling as a flaming shish kabob, Jerrod and Kairon manage to see through a murky past to a bright future together . . . maybe.

It was a mistake, Kairon thought. A stupid mistake. Why did he have to kiss him?

How long had it been since he’d tasted those lips? Smelled his unique scent up close and personal. He wanted Jerrod more than he had ever wanted him before. But why? His cheerful temperament? Kairon even had to laugh at that one. Truth be told, Jerrod had always been a prickly bastard and age had only enhanced his more abrasive character, instead of sedating it. But Kairon wasn’t fooled. He’d sensed Jerrod’s longing in that kiss. He’d also seen the bulge in his pants.

It had been twenty-four hours since he and Jerrod had paid a visit to Alderman and everything still remained calm; as of yet, no retaliation from the primeval vampire. There was also no word from Jerrod, two things that Kairon hadn’t expected.

Driving to work, the sun recently set, Kairon mused on how life could still throw him a surprise once in a while even after all this time. He was positive that tonight would bring changes, hopefully from Jerrod, and not from Alderman. As for Alderman, Kairon didn’t care if he ever heard from the corrupt councilman for the rest of eternity, the saying “no news is good news” never resonating more.

Checking his phone one more time for a text, something he had been doing a lot lately, Kairon veered the SUV in the parking lot behind Killer Kuts as carefully as he could while gazing at his cell’s screen. “Nothing,” he muttered under his breath as he brought the vehicle safely to a stop. Getting out and shoving his phone into his jeans back pocket, Kairon slammed the door and locked it by remote, two quick beeps interrupting the still night. Judging by the lack of cars in the lot, he was the first to arrive for work. Sniffing the air, Kairon smelled something burning. At first, he assumed that someone in a nearby house had started a fire, but the temperate night didn’t lend to that conclusion. Instinct told Kairon that his creeping sense of unease signaled danger. Tracking the smell by foot, he raced out of the parking lot and around the cinder block strip center that housed Killer Kuts and headed for the street. He looked at Everlasting, the salon dark minus a flicker he spotted through the window. Was it a security light? Kairon wondered as he started across the street to investigate, looking both ways for traffic beforehand. In an instant, the flicker grew into a massive glow, then exploded. Vibration rocked through Kairon’s body as slivers of glass pierced exposed flesh. He was aware of intense heat and weightlessness before becoming airborne and crashing hard onto the pavement.

Jerrod heard it before seeing it, that flash of orange and red coming from Everlasting. The sound thundered in his ears and rolled around in his brain. It took several seconds before he realized that the dark object hurling over the street was Kairon.

Tearing toward Kairon, Jerrod shouted as Kairon’s body came to rest on Killer Kut’s brick wall. “Kairon,” he said again, but the vampire didn’t move, didn’t make a sound. Jerrod kneeled by Kairon, the intensity of the fire’s heat hot against Jerrod’s shoulder blades. He scanned Kairon’s body for significant wounds but saw only superficial lacerations that were not life-threatening. Jerrod leaned in and wrapped one arm between Kairon’s back pressed against the wall, giving him support. “Can you hear me?”

It took seconds full of agony and doubt before Jerrod detected the slightest movement of eyelids. Then Kairon’s lips opened. “The entire street can hear you.”

Jerrod’s laugh came out like a sob. “What the hell is going on?”

“I think you need a new place to work.” Kairon blinked, looking dazed. He took in a slow breath through his nose and shifted in Jerrod’s arms. “It took an explosion for you to hold me. You’re one hard man.”

“Too late, because at the moment I’m growing inch by inch.”

“You’re impossible,” Jerrod said, unable to hide the love he had for Kairon. “What can I do?”

“What you’re doing right now is all I need, baby.”