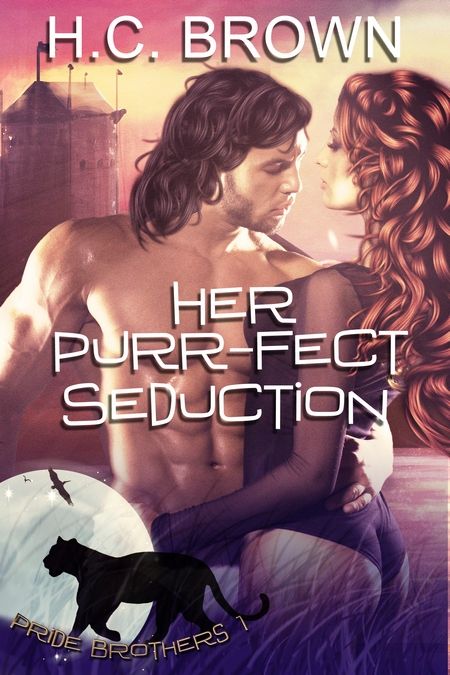 Trapped in a medieval world, will Jill win her captive’s heart before the delicious shape-shifter sells her into slavery?

Jill Morfranna, a sassy redhead from New York, is enjoying a photo shoot in the Scottish Highlands when she stumbles into an alternate realm. Trapped in a frightening world of strange creatures, her life turns upside down when a sinfully handsome shape-shifter kidnaps her. Will she win Dare of Knight Watch’s heart or will he trade her for his sister at the next slave auction?

Jill opened her eyes and blinked to clear her vision. Pain shot through her temples. She wet her parched lips and glanced around. Where am I? Above, a light flickered and illuminated the curved wall of a cave. Terror gripped her and turned her stomach. Oh Lord, I’m tied up. Rope secured her hands and feet. She wrestled against her bonds and gasped at the pain in her wrists. The rough rope had shredded her flesh. Panic rose up her throat in a sob. She rolled onto one side and stared into the gloom.

A small fire surrounded by stones glowed in the darkness and the man from the loch sat cross-legged beside it, his hands resting on his knees. This time he wore soft brown and cream leather clothes.

Jill lifted her head and glared at him. “Where am I and why have you tied me up?”

His large, hooded eyes watched her for a long moment. He rose in one fluid movement and ambled to her side. He cupped her chin in one large hand and examined her face. He mumbled under his breath then knelt beside her and pressed a waterskin to her lips. She shrank away in fear at first, but then common sense took over. If she wanted to survive, she had to stay hydrated. She put her lips to the spout and took a long, greedy swallow. She coughed, choking. Rivulets of cold water spilled down her chin, and into her hair.

“You do not know, Human?” He lifted her hair and ran a warm finger over one ear.

Jill jerked her head away from her captor. She took stock of her surroundings and frantically sifted through all the information she had read about hostage situations. She wanted to scream her lungs out. I must try to stay calm; this is the first rule of survival.

“Well, I know I’m in Scotland, but where, precisely, is here? Why do you call me ‘Human?’ Why am I tied up?” She wiped her mouth on her blood-streaked arm.

The man sat back on his haunches, his face concealed by the shock of black hair that hung to his shoulders like silk. Disorientated, her head pounded and the many cuts across her arms and face burned. He leaned toward her to check her bonds and the waves of fear dissipated. His warm, musky scent delighted and intoxicated her senses, and she sucked in his fragrance like a pain-killing drug. He is gorgeous. I bet he would make a fortune as a cover model. She shook her head. Had she gone completely mad? The man had kidnapped her and might murder her in the next second.

“You are tied because you are my prisoner, and I know not of this Scotland that you speak. This is the realm of Lyoness.”

Jill picked at the knots at her wrists. “Then I’m lost. Why do you call me ‘Human?’ We are both humans.”

He lifted his dark head and glared at her.

“I am not human. I am Arious Pride. He snorted as if insulted. He turned away and bent to add more sticks to the small fire. “You have a name, Human?” He pushed the hair from his face with both hands, and lifted his head to stare at her with frightening intensity.

The man tipped his head back and hissed. His full lips curled to display remarkably white fangs. A knife appeared in one of his hands and he sprung toward her with menace. Jill screamed and rolled away, clawing at the ground in a frantic effort to escape. He has fangs. Oh shit, he’s a vampire. Vampires really exist.

“Witch! As I thought, Morfran sent you through the Stones to bewitch me and steal my soul. I have found the device you carry. Tell me the truth, and I will let you die swiftly with dignity.” He stood over her, waving a sharp blade from side to side.

Jill looked into eyes filled with fury. She sucked in a deep breath to steady herself. He would kill her in an instant if she failed to placate him. She fought back tears pricking the backs of her eyes. Stay calm and reason with him.

“A witch? Give me a break. Do you really think they exist? Look, buddy, I don’t know what you’re on, but I don’t have a device to steal souls. No one sent me to bewitch you. Look at me; do you really believe I could do that? I am butt ugly and fat and no man would give me a second glance. This Morfran person would send someone beautiful to bewitch you, not someone like me. You must be able to see that.” She shrugged. “I’ve never met Morfran, but I do know about the Morfran Stones. In fact, I visited them this morning and took some shots, that’s all.” She inched away until her back hit the hard rock wall. “Hey, let’s talk about this before you kill me.”

The man inclined his handsome head and sniffed, his mouth open as if he tasted the air.

“Mayhap I was mistaken, Human. If you believe, you can trick me you should know that I am not easily fooled. Know this because I will kill you if you allow one lie to cross your lips.”

Jill lifted her chin and met his gaze. “I won’t lie to you, I promise.”

“I can smell your fear, but your underlying scent is indeed strange. Like honeysuckle. It makes my head ache as if it is a demon scent. If you speak the truth, do you claim that you are unable to wield sorcery over me, Human?”

He had calmed, his gaze had turned softer somehow. Jill tried to plaster some semblance of a smile on her lips pleased her calm demeanor had worked to some extent. “I swear I have no special powers, and I’m sorry my perfume offends you. What’s your name?”

He slid down on the floor next to her, and leaned his back against the cave wall. Jill desperately tried to appear calm and unthreatening. With a little luck, she might be able to talk herself out of this. Her attention went to the dagger in his large hands. When he reheated the sharp blade, she sighed with relief.

“You speak in riddles, Jill of Morfran. If you do speak the truth, it would seem that you came in error through the Gate. The Stones hold great magic. Our wise men say they can send travelers through time, and dimension. The Fae tell stories of lost humans abandoned within the Five Gates, never to return from whence they came.”

He sat in silence as if contemplating how to continue the conversation. The long, uncomfortable moment hung between them until he inclined his dark head.

“My name is Darrius of Knight Watch. My friends call me Dare. Methinks witch or not, I will spare your life, for now. You will make a fine trade for my sister.”

View all books
The Black Knight