Brad Morrison wants a man, in him, over him, dominating him.

But having a gay son wasn’t in his father’s vocabulary and to please him, Brad marries Jane. They agree to live separate lives but the moment Jane tries to involve him in a ménage, he ends the marriage.

He needs to come out but informing his father won’t be easy.

Turning to his best friend, Jett, for advice, he discovers the man he has drooled over for years is interested in him not only as a lover but as a sub.

With his homophobic father on the rampage, and an ex-sub waiting to take his place, will Brad’s fragile and oh, so hot relationship with Jett survive?

Later that evening at the restaurant, Brad shrugged off his jacket and slipped it over the back of the chair. He glanced around. Thankfully, the waiter had seated them at the back, in a more intimate part of the restaurant. He’d taken special care of his appearance and felt a little stupid. The thought of seducing Jett had run through his mind all afternoon. Hell, he had no idea if the man would punch him in the mouth if he told him he was gay.

He smiled at Jett sitting opposite and the frank, appraising look his friend gave him offered him cause to hope. His stomach fluttered. They ordered, and Jett leaned back in his chair and turned his moss-green gaze on him.

“Casual wear suits you.” Jett’s mouth turned up at the corner in a lop-sided smile.

“Thanks. Jane hated me wearing anything other than a suit. I can’t believe how relieved I am to be free.”

“So, what happened?” Jett rested his elbows on the arms of the captain’s chair and made a tower with his fingers.

Brad laughed. “I feel like I’m in a confessional.”

“That bad is it?” Jett leaned across the table. “We’ve been friends for over a year, and I think you know me well enough to understand anything you say to me stops here.” He covered Brad’s hand and squeezed. “You’ll feel better getting it off your chest.”

Brad smiled but inside his stomach clenched from the intimate touch. Jett’s warm hand lingered then dropped away. His friend’s kind gesture had bolstered his courage, and he sucked in a calming breath. “Here goes nothing. It was a marriage of convenience, and we never had sex. Of course, I knew Jane had lovers and to be honest I didn’t care. It came to a head about six months ago. I’d found out the time she usually had regular liaisons with her lover in my house and arranged for my lawyer to come along and act as a witness. We walked in the front door, and she was doing it with some guy on the sitting room rug.” He shrugged. “Well, it was the excuse I needed to end the sham of a marriage.”

“Is that all? I felt sure you were going to tell me you were gay, and she found you in an awkward position.” He chuckled. “You do know I’m gay, right?”

Brad’s stomach squeezed. He forced the words over the lump in his throat. Good Lord. His face grew hot. Fuck, I’m blushing. “No, I didn’t know—well, not for sure. I’d hoped you were.” He rubbed both hands over his face and lifted his chin. “And yes, I am gay.”

“I’ve met a few guys in mixed marriages, you know, the gay men who live with straight women? Did she know you were going out on the low down?”

“Did she start taking lovers after she found out you were seeing men behind her back?”

“You don’t disgust me, you fascinate me.” Jett leaned back and stretched his long legs. “Tell me what led to this realization. To be honest, it’s rather unusual for a guy to go from virgin to sub but I do know guys who have craved domination from the get-go.” He observed Brad with interest. “What made you want to become a sub?”

Brad met his gaze and recounted the entire story in graphic detail. Jett remained silent, listening without changing his expression. The only sign came in the form of a raised brow after he’d described how much he enjoyed Rox dominating him the first time. “I went with him twice over six months ago, but I’ve been too gutless to actually join a leather club. I haven’t discussed this with anyone else. My family and everyone else thinks I’m straight.”

The waiter arrived with their meals before Jett could respond. Brad tensed, and the air between them crackled with emotional electricity. He drew a deep breath and unconsciously held it, waiting for Jett’s reply.

“You see, I knew you were gay. You mentioned your wife, so I gathered you hadn’t come out yet.” Jett chuckled and cut into his steak.

Brad let the breath whistle out between his teeth and stared at Jett in amazement. “How come you knew I was gay all along? Do I have a ‘tell?’”

“Oh yeah. You look at me as if I’m naked and have done, since the first day we met. I was just giving you time to pluck up the courage to ask me out.” He grinned wolfishly. “The sub part is a bonus. You have realized by now I’m a Dom?”

Brad ate his meal slowly, savoring every delicious mouthful. He listened to Jett talk about baseball and hoped his responses were valid. He could think of nothing other than kneeling before him, taking his punishment then sliding under Jett’s naked body and tasting every inch of him. His cock ached in anticipation. He finished eating and sat drinking his coffee in silence. He had no idea what to say. Rox had made it easy, no ties, and no promises. On the other hand, Jett was a whole new and exciting ballgame. 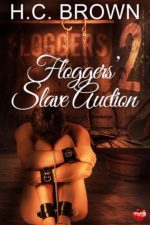 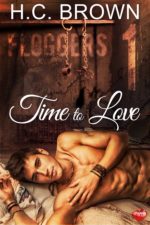 Branded by the Texas Rancher