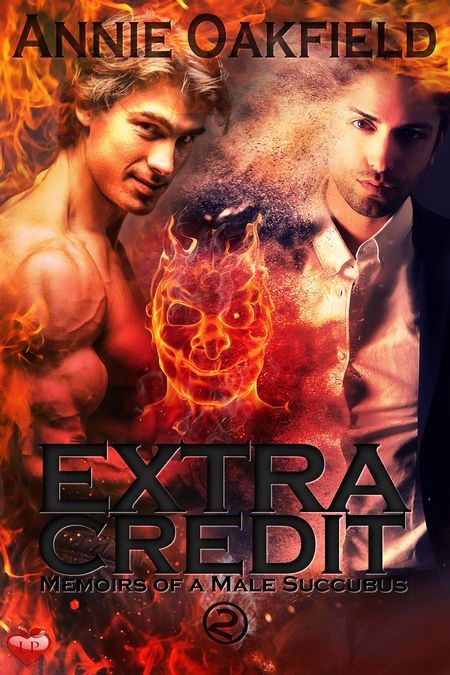 Samuel Driver had been a thug, a thief, and a career criminal — until the moment he got killed. His violent escapades secured him a place in Hell, but his fighting spirit earned him a reprieve, and a chance to walk the Earth once again.

Contracted to become a male Succubus — a reaper of masculine life forces — Sam discovers a hidden talent for seducing men. He becomes so proficient, his demonic caseworker singles him out for a special task, one that will earn him extra credit and even improve the conditions of his demonic contract.

But the task is far from straightforward, and Sam must summon all his guile in order to seduce a specific man, a campaigning anti-gay politician described as ‘completely and utterly one-hundred-percent heterosexual.’

“What do you want, Asmodeus?”

“I have a proposal for you.”

I frowned. “What kind of proposal?” My demonic caseworker had gained my undivided attention.

“I have a particular man I wish you to seduce for me.”

“No catch, but there is a reward for succeeding.”

He leaned back in his chair. “I’m willing to alter the conditions of your contract.”

My suspicions rose. “Alter it how, exactly?” What was so important?

Asmodeus studied his fingernails, which were more like talons. “You are currently contracted to reap a minimum of one soul per week. I’m willing to amend that.”

“If you succeed, I shall require you to reap only four souls per calendar month.”

I thought about it. “Make it one per fortnight, and you have a deal.”

He laughed harshly. “Or I could return to my office and destroy your contract entirely.”

“Yes. The destruction of said document would sever all ties holding you to the corporeal world and . . .” His forefinger performed a parabolic path up, over and down toward the carpet at our feet. “You’d be sent straight to the underworld.”

I was horrified. “You’d risk losing everything I bring in over a technicality?”

“Do not presume to bargain with me, Sam. You appear to have overestimated your worth.”

“But I’m good, and you know it. I reaped three today already.”

He raised a bushy eyebrow. “Did you indeed?”

“And aren’t I your only male Succubus, one of a kind?”

“You are, and you appear to have a modicum of talent for the role.”

“I tell you what, Sam.” He studied his talons. “This happens to be a two-stage deal. Seduce target number one, and I’ll amend as discussed, four per calendar month. If you then succeed with the second part, I will consider your proposal of one per fortnight.”

“And what is this second part? Something impossible, no doubt.”

“But well within the skill set of a man such as yourself.”

As I studied his blurring, shifting face, I realized the truth. “You’ve sent other people out to do this, haven’t you?”

“Maybe.” He turned to stare out of the window, avoiding my gaze.

“And they failed, didn’t they?”

“You are most perceptive, Sam.” He sighed heavily.

“So, do we have an accord?” He extended a black-nailed hand.

“No conditions if I only manage the first one?”

“No conditions. Four per calendar month. If you succeed.”