If it’s true love, then even Time and Space cannot be an obstacle.

Cute, youthful, struggling artist Jace Hamilton needs to find a new roommate to help make ends meet. He has no idea that posting that advert will change his life. Discovering a tall, dark and mysterious stranger on one’s doorstep is the stuff of cliché romance novels, but that’s exactly what happens when Jace meets Daniel Philips—a tall, dark stranger who oozes sex appeal and is hiding a fantastical secret!

Despite the obvious chemistry between them—and several fun romps between the sheets—it seems that this is nothing more than a holiday fling because Daniel is only in town for two weeks and is very evasive about his travel plans. But Daniel has fallen hard and isn’t going to let a little thing like a 500-year age gap stop him from being with the one he loves.

An emotionally-charged gay romance with a twist. 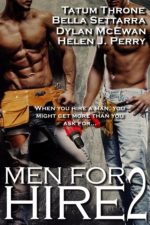