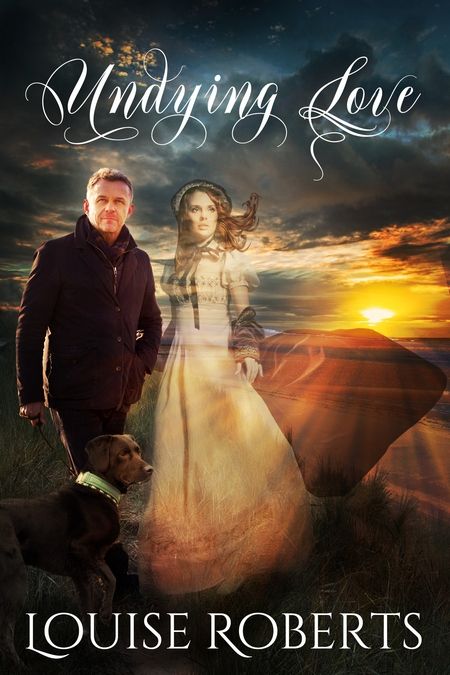 What if you discover your long-lost soulmate is a lingering spirit; how far would you go to be reunited?

What if “love at first sight” was no more than two soul mates recognising each other through eons of time? But what would happen if one of those such souls was a lingering spirit, whilst the other had reincarnated into another human life form? If that were the case, how far would anyone go for the sake of love to be reunited?

For Peter Grant, the moment he steps into a house for sale in a coastal hamlet in Norfolk, England, a feeling of déjà vu descends on him, and the need to purchase the cottage is overwhelming.

Divorced and retired, he has ample time to enjoy the peace and quiet of his surroundings, with just his faithful dog for company. The only distraction is the nightly sound of a woman weeping . . .

As per these recent weeks, he had slid into Eleanor’s bed and hugged a pillow, allowing himself to drift into a deep sleep, longingly awaiting her appearance before him . . .

“Will they be staying the entire weekend?” she asked, and he detected a hint of disappointment in her voice.

“Yes, but only because Geoffrey has to give a lecture first thing Tuesday morning,” Peter explained.

They were in the front garden, seated on the bench located under the dining room window; the sun was shining, its heat enveloping them comfortingly. Her hands were lying on her lap, Peter had his right arm around her shoulders.

“I don’t think it right that Mother’s things should be given away.” She pouted. “If anything, those possessions are rightly mine.”

“Eleanor, my darling, that might be so, but you must understand that you can no longer claim them,” Peter said apologetically. He knew she was still not fully accepting her situation, even though, logic alone should have made her realise she was an incorporeal being. “Geoffrey, after all, is a descendent of your brother, so in a way, he has every right to them as well.”

“But what does a man want with such feminine articles?”

“I am sure he’ll treat everything with the respect they deserve. As for the books, I have already suggested they are donated to the university’s library. Your father would surely have approved.”

She turned her head to face him, her expression had mellowed.

“Would you like to go for a walk?” he asked, standing as he did so.

She reached for his proffered hand, and he helped her to her feet. They stepped out of the property and walked down the road for a little while before heading in the direction of the sea. They continued along the coastal path, where on one side the river meandered lazily toward open water; on the other, cattle grazed in lush pasture.

Holding her hand, fingers entwined, his heart beating loudly in his ears. Never had he ever believed he would fall in love again. After the traumatic time following the divorce proceedings that Isabelle had instigated; Michael’s death and Helen disowning him, Peter truly believed he no longer had any chance of ever finding a reason to go on. Since arriving in Norfolk, buying the cottage, being given such a loving dog by the dearest of friends, and managing at some semblance of normality, had his feelings become more positive. He now had a purpose, and that was to give Thor, and also, Eleanor, some security. The mention of her name in his mind always made him crave for her touch, and as though on cue, she stretched her head up towards him and kissed his cheek. As old as he was, in his dreams, he was always younger; as young as Eleanor; it was a truly odd sensation, although, in truth, he never “felt” old, until, of course, when he looked into a mirror and the reflection never lied.

They had reached a copse of trees by Holkham Beach. The first time they had walked to this spot, he had an odd sensation of having been here before. When he had told Eleanor of this, she had enlightened him this had been the place where he, as James, had last made love to her prior to his departure to sea. Since then, each time they had returned here, they had relived the moment. Today would be no different. She was far too beautiful not to make love to.

He helped her to sit, then lowered himself next to her. The ground was covered with dry pine needles and a scattering of cones that emitted a sharp, sweet, citrusy odour giving the air a refreshing feel.

Peter held her chin, turning her head towards his; he leaned in and kissed her lips gently, at first, then more passionately. The sensation making his heart leap for joy as she reciprocated every kiss.

Eleanor encouraged him to lie on his back, she then straddled him and leaned forward to continue to embrace. With one hand, she reached behind her back to undo the lacings of her dress, until it was loose enough to release her breasts from the captivity of the garment.

Peter felt his manhood stiffen, and he fumbled clumsily beneath her crotch to undo his trousers. She shifted obligingly, and helped him to get his organ out, then lowered herself on it. He had always been puzzled, each time they had made love whilst she was still dressed, as to when she had removed her undergarments; until, once when she exposed them to him, did he notice they were a type of pantaloon, split in the middle to expose the private parts—handy he thought!

The steady, circular rotations of her waist, and the contractions of the muscles in her nether regions, were magical as always. Peter closed his eyes to savour every moment, until, unable to hold back any longer, they both climaxed at the same time.

“I love you so much, it hurts . . .” Peter whispered and opened his eyes. He was alone in a darkened room, the electric clock on the bedside table was blinking 3:20 a.m. in red fluorescent light. He sighed and hugged the pillow tighter.