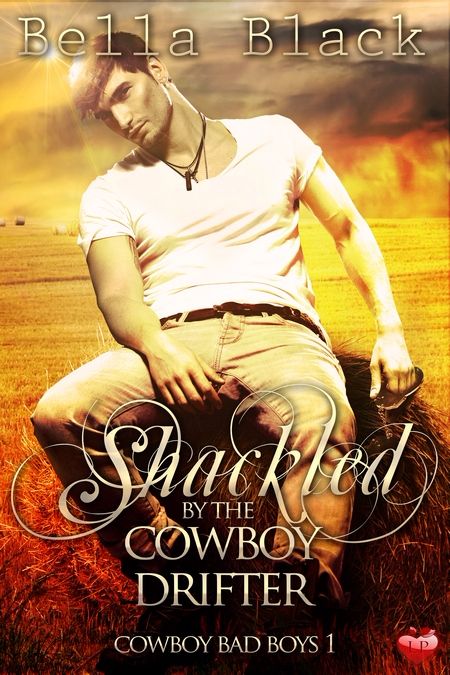 Shackled by the Cowboy Drifter

Ash Carmichael, an aspiring actress from England, is down on her luck. However, when she meets Zack Delaney, a gorgeous cowboy drifter, at the diner where she works in Long Beach, California, things start to look up.

Why can’t two lonely people enjoy each other’s company with no strings attached?

Only trouble is, Zack Delaney is not all he seems. An undercover operative with the FBI, he is closing in on a drug cartel. Getting involved with Ash is not an option. In fact, it could prove downright dangerous for her. When Ash sees him dealing drugs, he cannot tell her the truth about his work, yet the attraction between them still remains.

They may have shared one night of unbridled passion together, but do they have a basis for a lasting relationship? Or have they both been burned too much in the past?

Ash ordered a white wine and settled into an empty booth. The bar was dimly lit, and she eased back into the seat. She didn’t usually drink alone, but she’d had one hell of a day. Plagued by stupid customers and a disastrous casting for a bit part, she needed a pick me up. A glass of Chardonnay would certainly hit the spot.

The small condo where she lived in Long Beach, California, had grated on her nerves ever since she’d arrived home. So she’d showered, put on a red, backless dress, and headed across the road to The Hub, a small, friendly dance bar. She knew some of the people there, so she didn’t feel too conspicuous.

Within a half-hour, she’d begun to relax. Every now and then, a couple would head onto the dance floor to make out. Now that was something she missed, the close contact with a man. She guessed it was her own fault that she was still single. She’d been asked out quite a few times since Rob had left the scene, but at the time, she’d been reluctant to start another relationship. She just didn’t want to get hurt again.

Chuck, the barman, came over to her table and placed a drink in front of her.

He pointed behind her. “Guy at the bar bought it for you. Said it’s by way of an apology.”

Ash craned her head. The asshole cowboy from the diner raised his bottle of Bud. As her eyes locked on his, he smiled. The guy had seriously pissed her off, and yet here she was smiling back at him. What was wrong with her?

Well, that smile had done it. Wearing jeans and a black T-shirt, the cowboy sauntered over to her table. He appeared even more muscular and tall up close. As he stood over her, she guessed about six-three and two hundred pounds. His dark, disheveled hair fell about his face, giving him a devilish appearance.

Watch out Ashley, this guy may just roast you alive.

“Do I have a choice?” With her heart in her mouth, she watched as he settled his athletic frame into the seat opposite. His piercing blue eyes rested on her as he leaned back against the velour upholstery. He pointed to her glass of wine. “Peace offering.”

“I’m afraid I acted out of character in the diner. I’m not normally such an asshole.”

“You could have fooled me.”

He smiled. His wicked grin sent goose bumps down her spine. His eyes showed amusement and twinkled from the surrounding lights as he stared at her. “I hadn’t slept for two days. Though that’s still no excuse.”

“Then allow me to apologize once more, Ashley.”

With his dark locks falling about his temples, and a smile on his lips, she felt rooted to the spot. The word predatory came to mind, and she reminded herself that she could very easily become his prey. “Very well. Apology accepted, Mister…?”

“Zack Delaney, but please call me Zack.” He held out his hand. “Nice to meet you, Ashley.”

“Ashley Carmichael, but you can call me Ash. I’ve always preferred the shorter version of my name.”

He reached across and took her hand in his, squeezing it lightly. His flesh felt warm to the touch, and a tingling sensation surged through her veins. She felt vulnerable just being in his presence. His gaze finally came to lock with hers. Startling blue, his eyes held her entranced until she said, “Thanks for the wine, Zack. I don’t normally drink alone, but I had one hell of a day. I just couldn’t stomach the close confines of my apartment anymore.”

“Yeah, a bit like the four walls of my motel room.”

His rich southern drawl gave him a tough, masculine edge. He had a certain ruthless quality to him. He’d already aroused her interest more than she cared to admit. She stared at him. Once more she noticed the cuts and grazes on his cheek. “So what happened to your face?”

“Some local difficulty in Tijuana.”

“Hmm, you should be more careful.” With his face all grazed, he looked like six-feet-three-inches of pure trouble. He appeared dangerous and out of control. He was everything that she knew she should avoid, but he excited her, too. Simply put, he turned her on.

Branded by the Texas Rancher

Bound by the Montana Mountain Man

View all books
One Last Christmas