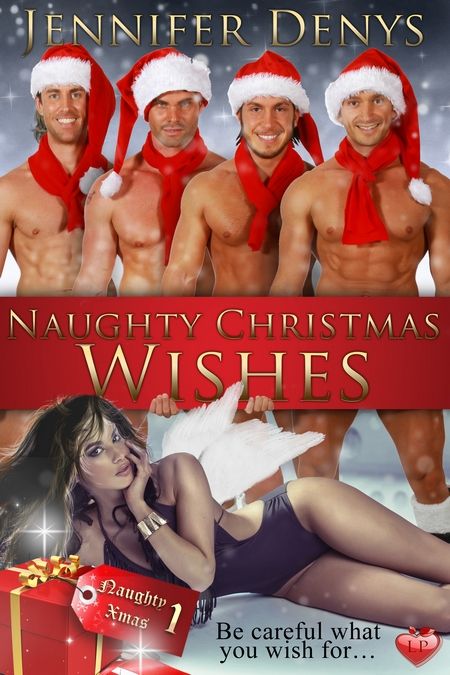 Be careful what you wish for…

You should be careful what you wish for… Fay is a Christmas fairy who has been with the same family for many years and gets her kicks watching the mother and father have sex on the sofa—although she despairs about their lack of variety. But this year she is replaced by a shiny new angel.

Depressed at being discarded, and no one with whom to spend Christmas,  Fay goes to a paranormal bar on Christmas Eve and sees four handsome (and young!) elves who have just finished their duties for that year. She makes a wish they all ignore how old she is and is delighted when her wish gets granted. So she makes more wishes—naughty wicked ones!

Find out if they all come true!

Reader Advisory:  How do four elves go into one fairy? This book contains the saucy answer.

So how exactly does four into one go?

They had arrived in the hotel room on the second floor. There was a huge bed in the room—triple king size, she reckoned! Fay wasn’t sure if all four of her elves were staying in that room or if it was just one of them.

An arm wrapped around her waist. She looked up and smiled. It was King, not surprisingly. Fay had come to realize it was he who was the leader of this little band of handsome elves.

“So, my lovely, we can do this any number of ways.”

“You can have just one of us and the rest will leave you to it.”

Fay tried not to show her dismay.

That’s more like it. But she was still a little disappointed.

There was a pause as Fay bit her lip, not sure whether that would make her seem a slut like the nymph and her friends.

“Hey, King. I think our little fairy wants a lot of attention.” She glanced at Ringo as he reclined on the bed, wondering how much he guessed. He winked back at her and she gave him a sweet smile.

“What about it? Do you want everyone?” King’s deep voice reminded her that she hadn’t yet answered his question.

“S–sure. Just tell me what to do.” Her voice was a little high-pitched.

All those times she had imagined what she would do if she got the chance, flew out of the window. Fay just wanted to have sex—in whatever form it came.

Elliott, the bald one, came up behind her. She noticed with a start that he was already naked. “We need to get rid of this, for starters.” He then proceeded to divest her of the ragged dress she hated, tugging at her sleeves to pull them off her shoulders. As he moved, she was aware that he was also straightening out her wings.

She looked over her shoulder. “Thank you. It’s so difficult to do myself.”

“You are very welcome.”

Before she could say “Santa Claus”, she was naked. Naturally, being a doll, she had no underwear. She never understood why humans wore underwear, but didn’t make their toys with any.

Her fingers came up to untangle her messy hair and even it out.

Fay’s eyes opened widely at the unexpected compliment. “My hair? You must be joking.”

Ringo laughed as he jumped off the bed to undress. “It reminds E.T. when he had his own hair, back when he was a baby!”

While they were all laughing, Fay saw Harvey, who had also removed his clothes, beckoning her. He had such a wicked grin on his face. He might not say much—well, anything, so far—but she knew exactly what he wanted.

Stepping forward, she reached toward Harvey’s outstretched hand, but was a little surprised when he didn’t tug her into his arms or push her onto the bed. Instead, he reverently bowed and kissed her fingers.

Fay felt like a princess and gave a naked curtsy, giggling as she did so. Harvey then sat on the edge of the bed and gently pulled her forward. When he patted his legs, she climbed atop him.

Before she got a chance to wonder what was going to happen next, he took her breasts in both hands and pressed them upward bending his head to take one of her nipples in his mouth.

Elliott came up behind her, whispering in her ear, “Is that good?”

Harvey’s tongue swirled around her nipple as it puckered to a hard, throbbing point. She reached up into his mass of white hair to hold his head. She wasn’t sure if it was to push him away or hold him there. “Yesssss.”

The others laughed behind her. But she didn’t have time to be self-conscious as Elliott pushed her hair aside and started nibbling her neck.

Oh, these guys know how to treat a girl.

Fay had rather forgotten there was anyone else in the room when King took command. “Okay, guys, enough playing around.”

This was just ‘playing’? Fay was panting so hard she was sure she’d explode any second.

View all books
An Upside-Down Christmas