We use cookies to ensure that we give you the best experience on our website. If you continue to use this site we will assume that you are happy with it.OkRead more
View basket “Purr-fect Lust” has been added to your basket.

Lexi Gifford is the editor-in-chief of a popular women’s magazine named Innocent. Lexi needs a new assistant and a new lover, and she finds both in Theodore Logan—a rather naïve and virginal farm boy from Iowa.

At first, Lexi is hesitant about getting involved with Theodore—who goes by Theo—because of a bad previous relationship. There’s also the age difference, because Lexi is thirty-two and Theo is eighteen.

However, any hesitation on her part flies out the window when he winds up modeling for an upcoming issue of Innocent, when a model doesn’t show for the shoot. Unable to resist seeing his hunky farm boy frame clad only in a pair of form-fitting bikini bottoms, she ravishes Theo.

Their relationship blossoms both in and out of the bedroom, and eventually Lexi realizes that her passion for Theo goes beyond the merely sexual and that she has genuine feelings for him.

Lexi almost fainted when she saw Theo walk out from the changing room, wearing that tight dark-blue bikini bottom, displaying that oh-so-impressive bulge of his, and nothing else. Even Pam looked quite impressed, and she shot sexy, half-naked—and sometimes fully-naked—men for a living. The looks both women were giving Theo were clearly embarrassing him, judging from the beet-red blush on his face. Lexi wasn’t worried about that showing up in the photos that would appear in the magazine, since she could always airbrush them out. Not that he needed airbrushing in other areas, Lexi thought rather wickedly to herself.

Pam instructed Theo on his various poses, and, just like he did with her, he took instruction very well. Lexi had to cover a smile with her fingers as she thought about how well Theo would take “instruction” in bed. By the time the shoot was finally, mercifully over, Lexi was so hot and bothered, it was all she could do from jumping Theo’s hunky bones, right then and there!

When Pam asked Lexi if she wanted to look over the photos, she mouthed the word “later” and Pam nodded, knowing precisely what she meant. After Pam—along with the hair and makeup stylist—finally left, Theo gazed over at Lexi, the sexy blush still prominent on his face, and asked, “Can I go get changed now?”

“Nothing,” Lexi said as she started walking briskly toward him. “Nothing at all.”

She stood right in front of him, and, after giving him the once-over, asked him, “So, tell me, Theo, have you ever been with a woman before?”

Theo had a shocked expression on his face. “Uh, well,” he stammered, “not really.”

She drew her face closer to his. “Have you ever even kissed a girl before?”

“Uh, well,” he stammered again. “I did kiss my ex-girlfriend Mary Lou one time at the barn dance.”

“Mary Lou,” Lexi repeated. “How quaint!” She placed her hands on his sculpted chest, thinking how all that farm work really paid off. “Tell me something, Theo.” She looked directly into his eyes. “Would you like to kiss me?”

Theo, looking more shocked than ever, stuttered for a bit before finally saying, “I–I can’t.”

“So? Nobody will have to know.” She drew her face closer to his, until their lips were almost touching. “It can be our little secret.” Theo tried looking away, but Lexi placed her hand on his cheek and made him look at her. “Come on, baby, just one little kiss.” 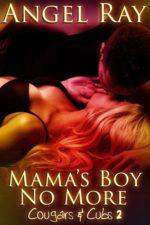 View all books
They Hadn’t Expected It ...