Proof that you CAN have your cake and eat it.

Close your eyes and imagine a small town’s fire station packed with gorgeous muscular firefighters. Enter Jensen Brother, a naïve rookie who is about to get a crash course in gay loving — from a dozen of his colleagues . . . during their birthday celebration.

This party could be the hottest ever!

READER ADVISORY: A M/M, M/M/M Romance containing nude scenes and intimacy between male firemen. Birthday candles and burning buildings are not the only heat sources in these pages.

With the rain cascading past my eyes, I could barely see where I was going, but at least the exertion drove away some of the river’s deep chill.

Blacktop replaced the soft turf beneath my boots, and flashing lights illuminated the downpour, strobing it into stillness for mesmerizing fractions of a second.

“Are you both okay?” A large silhouette asked.

“Fine, Sub,” Craig answered. “Except this one took a tumble into the river.”

“Yes, Sub. Come on, kid.” Craig tugged my arm, urging me around to an unoccupied fire truck and opened the door to the rear compartment, where the crew normally rode. I’d expected him to climb in behind me, but a moment later, he appeared in the driver’s seat.

“Strip off the uniform, kid. You need to get heat into your skin.” He slid the heat control all the way over.

“Promise . . . you won’t take . . . advantage of me?” I managed as my numb, shaking fingers unfastened the jacket. Hot air washed past me. The engine had been running the whole time we’d been working, so the heater was already blasting like a sauna.

“Get on with it, kid. Before you freeze.” Craig watched carefully as I peeled off the layers. His eyes ignored the clothing, lingering on my pale skin instead.

“Don’t huddle up,” he advised. “Sit straight and let the air get to you. Knees apart, too.”

“Fair . . . fair enough.” The door opened, and Ben climbed in. With his large frame beside me, the bench seat suddenly felt very small. His wide eyes took in the sight of me in my underwear.

“You fell in the river?” Ben squeezed my jacket, forcing water out of the material. “Why aren’t you warming him up?”

Craig indicated the heater. “What the hell do you think I’m doing?”

Ben put two big hands on my thighs. “He’s freezing!” Ben pulled off his thick jacket and threw it aside and then pulled off his T-shirt. I stared as he unfastened his pants and pushed them off, kicking his boots aside in the process.

“Um, Ben? Wh–what are you doing?” I asked. His big arms were already around me, pulling me against him.

“Keeping you out of hospital. Here.” He urged me onto his lap; his arms went around my body, and I was pressed against his naked chest, my cheek on his shoulder. His skin felt like fire against mine.

Craig’s eyes filled the rear-view mirror, watching intently, but aside from Ben’s growing erection under my thigh, he didn’t touch me anywhere else. I settled into his hot embrace, enjoying the fact that my bare body aroused him. Heat flowed through my veins and charged my body with an excited glow.

But all too soon, Ben lifted me off his lap and retrieved his uniform. I couldn’t pretend I hadn’t warmed, because the shivering was gone and my skin reddened where it had touched his.

“Thanks, buddy.” When I squeezed his erection, he lifted my hand away.

“No need for that, kid. I was only trying to help.”

“It was more fun than the heater.” 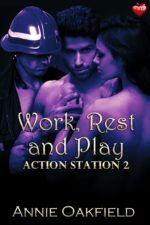