We use cookies to ensure that we give you the best experience on our website. If you continue to use this site we will assume that you are happy with it.OkRead more
View basket “Bound” has been added to your basket.

After stripping at Safeword, Thorn is abducted by Master Riley, the tall, blond and sexy Dom he noticed in the audience. Taken to a private dungeon, the last thing he expects to find is three sex-starved Doms waiting to punish him.

Disillusioned with men after his previous Dom betrayed him, he wonders if Master Riley—Mr. Tall, Blond and Sexy, is the one man to make him fly.

“You’re not on duty, and this is a private club, so sit the fuck down and feast your eyes.” Del Hood waved him toward a table in the front row. “That sweet thing is Thorn. You’ll need a whip and a chair to tame him, but I think you’re the man for the job. Thorn has trust issues, he needs a Master with patience, and you have the patience of a Saint.”

The stripper sitting center stage unfurled with slow, enticing movements to stand. Unable to breathe Riley’s attention slid over the twink’s angelic features. The spotlight highlighted green eye shadow and lines of kohl around his eyes. Glitter covered his cheekbones and flowed in a path down his neck to circle one flat nipple. Under the strobe lighting, Thorn’s smooth body became a living work of art, each sexy movement, each mind-blowing undulation, and oh-so-slow baring of skin had Riley’s cock straining against his zipper.

His attention fixed on the delicious man. With each beat of the music, Thorn peeled fabric to expose strips of tempting flesh. Riley’s nerve endings sizzled with desire for the man no Dom could tame. Unable to look away, he swallowed the lump in his throat to reply to his friend, “Thanks for convincing me to join Safeword. You know this angel?”

“He sure ain’t no angel. He is a fucking asshole, but his brother is my boy, Danny. I’ll get him to introduce you then Thorn might trust you enough to have a drink with us but take it slow, or he’ll run.”

“I know the type. Tell your boy, his brother will be in safe hands.” Riley chuckled. “Very safe hands.” He dragged in a breath and the rich, spicy scent radiating from the stage spilled over his tongue. Thorn danced as if in a world of his own, and he dragged his gaze away to watch the way the audience reacted. All to a man stared at Thorn with stupid expressions of adoration. He turned back in time to see the last strip of material slide from Thorn’s flesh leaving nothing more than butt floss to hide his engorged shaft. Oh, fuck, he is something special. Sweat ran into his eyes, and his cock ached. He pushed down the desire to snatch Thorn from the stage, take him to his dungeon, and fuck his brains out. Then you’d be lost forever.

He turned back to Hood and grinned. “Go get your boy. I think my meeting with Thorn should be backstage and private—just the four of us. If he is as Dom shy as you say, then you’re both going to have to hang around until he feels okay with me. I have one week’s vacation left to see if he accepts me.”

“Man, do you have him all wrong.” Hood barked a laugh. “That innocent looking ‘angel’ as you put it has a potty mouth, no respect for any of us, and will tell you like it is from the get-go—but if that’s what you want?”

Riley rubbed his chin then met his friend’s eyes. “I have a better idea. Is there a back entrance to this place?”

“Yeah, the stage door opens out onto a back alley. Why?” Hood eyed him with suspicion.

Riley turned around and headed for the foyer, Hood followed close on his heels. “Change of plan.” He turned and winked at his friend. “You know my motto, ‘if it don’t fit force it.’”

“What the fuck do you mean by that?” Hood raised one dark brow and glared at him.

“I’m going to get my car. I need to pick up a special delivery for the dungeon in my basement.” 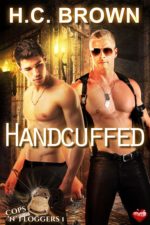 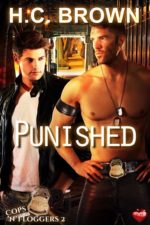 View all books
Temptation
Forbidden: The Boys of Banana ...